In the summer of 1945, in Holland awaiting repatriation, my father wrote and distributed a tabloid magazine for the members of his Royal Regiment group. Of course it included an interview with his chaplain and personal friend, Rev. Curry, who gave him some packages from home that could not be delivered, to help out. Thus my father “sold dead men’s cigarettes on the streets of Utrecht to pay the printer.” Here’s a poem I wrote much later:

The day peace was declared

he stood ankle deep in the flooded Rhine.

he walked out into a pitted field

and said to himself, What now?

That summer he kept busy

for his regiment’s tabloid.

Sold dead men’s cigarettes on the streets of Utrecht

to pay the printer.

At home he worked behind a desk

accounting for products he had no hand in.

He ran an office here or there,

moved cities, joined clubs, had a hobby or two.

And on cool spring nights

out beyond the streetlights where

he’d stop and stare up

at the starless sky.

What to get Dad for Father’s Day … something I never wondered while he was alive, since he had no patience for such things. Five years after his death, here’s what I have: a series of poems, including a couple of actual quotations from his unpublished memoir, acknowledging that the central event of his life took place before I was born yet overshadowed his life, and to a lesser extent, mine, ever after. I was able to show Dad a few of these poems before he died, and he seemed content that, although I was a writer, I wasn’t a complete loss. Most of this series made it into my book Winds and Strings.

The Ghost of Burwash Hall

The regimental portrait curls at the ends

from years in the closet rolled in a tube

but the eye still goes to one face in the centre.

Among a hundred and more in uniform

on the stairs of Hart House, the camera

lingers on one young recruit who,

as officer material, has grown a moustache.

All autumn he plotted trajectories –

charges needed to bring down the vaulted

mock gargoyles, latin inscriptions and all.

Humid nights in the college dorm

he lay sleepless till he could lie no more

who in passing dubbed him Ghost of Burwash Hall.

A year on, he passes unnoticed

between the lines of a flooded battlefield.

Either his unit is lost or he is.

Only sleep is his reward,

a dry place and an hour’s sleep.

his breath quickens at the sudden image

of a wooden door in an old stone wall.

He spent an hour, he says, searching the village

he once helped free, at last found the dairy –

and the door that saved his life.

One morning, in search of his unit

after a night behind the lines,

he turned a corner nearly face to face

with  a squad of Germans retaking the village

street by street and house by house.

He backed away into shadow

and wrapping cheese as if they didn’t see him

for a look or word could bring down fire.

he pauses to light a cigarette, somehow

I shrank behind this door.

His breath comes heavy as if he’s still there

staring at scarred wooden planks while

a ghost of smoke drifts through the projector’s light.

How I got out of that village

or found my way back to my unit

is what I’ll never know.

3. Deep into the Lines

We wore no divisional or regimental badges or flashes.

camouflage jackets, black berets instead of the regular brown ones,

and I had the knife I made in Ghent from a bayonet.

Never went anywhere without it.

We stripped our weapons down to bare essentials.

stocks and slings removed from Stens.

Knives securely strapped to the leg,

and we wore balaclavas instead of helmets.

Occasionally if we were on a perimeter check,

and the night was cold and crisp

we would remove our boots and stash them on the trail.

This would cut down any noise our hob-nailed boots would make.

We did not however go deep into the lines without our boots.

So you slog through the blood and shit of a European war. You stare through the fog at the ghostly cliffs of Dieppe and swear at the universe. Ride in tin-can troop carriers being bombed by the Luftwaffe and RAF. Scrub your mess tin out with sand and learn to live with diarrhoea. Learn to kill for a living with gun, grenade or bayonet; no commission.

I heard a sound behind me, and thinking it might be Jack or Harry,

with his Schmeisser pointed at my chest.

I tried to bring my Sten to bear,

but I had rolled onto it, and it was partly beneath me.

The German pulled his trigger, but the Schmeisser jammed,

I lunged and my Belgian bayonet knife

came up below his rib cage and into his heart

without a noise being made.

I think I shook for about two days after that

and was given that much time off.

One day you are pinned down by sniper fire, hit once. Your buddies on either side of you die before your eyes. You go into shock and wake up on a stretcher. Through a night of pain your only comfort is the darkness. A tin can drags you through the ruts and ditches of Normandy to a field hospital under canvas. Drinking water. Sleep

he rebuilt an Indian found in a ditch 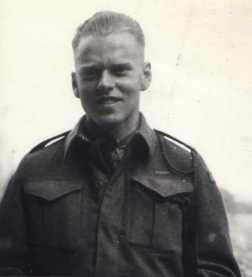 and gave it to his captain.

he chose instead to be a scout

so he’d depend on no one

and no one would have to depend on him.

Thanks to As in high school

he was sent with a band of Free French

to rescue their captured leader from a church

– carried her broken frame in his arms

all the way to safety.

and so was chosen for one last mission:

thrown from a low-flying plane before dawn

– parachute on a short string –

with orders to creep close to the prison wire

and tell POWs not to revolt

but sit tight and wait for rescue by noon.

Seems now I was always on my own

seldom knew where my unit was.

I guess it’s a kind of freedom.

It sat on a shelf by the telephone

with bowling trophies and souvenir seashells

when the pin’s spring-loaded

rod strikes the cap that lights the fuse

Pull the pin, release and throw

before the deadly count of seven

The disarmed grenade sat on a shelf

a fossil from explosive times

in the gloom of black-and-white TV movies

I lay awake in bed rehearsing

the  release   the lob   the count of seven

Years afterward he slept till five

on a Sunday afternoon

with little more than a wounded grunt

he dozes through the game of the week

Between innings switches to the history channel

to revisit the foxholes of his youth

Though he lives alone he still goes outside

to smoke beneath the stars

At two in the morning my father

trying to get some sleep

is ambushed again by a moment’s memory.

A path through snowy fields, a towering fir

– beneath it huddled round a coffee pot

Were these the ones he was sent to find?

trying as always to get to sleep.

Who sent him, with what message

he cannot recall, so much

is foggy from those days.

he remembers only a snowy field

a tall tree, a circle of uniformed men.