The Hundred Cuts: Sitting Bull and the Major

The Cabbage of Paradise: The Merzbook and other poems

Coastlines of the Archipelago (BuschekBooks)

Scroll down to find out more about my books.

My tenth book of poetry, Winds and Strings ranges from jazzy history to Borgesian meditations.

As well, there are plenty of personal observations about the strings that pull us together and the winds that tear us apart. Here’s one:

You didn’t see this coming but

there’s no way to back out now

Steer into the skid

look for traction on snow

Don’t lock the brakes or it’s all

Have matches, candles, blankets with you

If you’re stuck in a snow bank

that blocks the exhaust

don’t run the motor for heat

Open the door if you can

Look up and be glad

you can see the stars

The Hundred Cuts: Sitting Bull and the Major (BuschekBooks, 2009)

1877. An international diplomatic crisis faces the new Dominion of Canada. The celebrated and reviled warrior chief Sitting Bull has crossed the 49th parallel ahead of pursuing U.S. Army troops. Camped near Wood Mountain just north of the border, he asks for asylum in Canada for himself and thousands of his Lakota and Cheyenne followers.

For Major James Walsh, the North-West Mounted Police officer responsible for peace, order and the semblance of government across a vast area of the northern plains, life has just become much more complicated.

In a series of scenes and monologues representing the many sides of this life-and-death confrontation, Colin Morton casts light on a past whose consequences still demand attention. History, tragedy, poetry, story-telling – The Hundred Cuts: Sitting Bull and the Major reminds readers that we are all implicated in history, that the past is not gone. It is part of us. Watch a video of a reading from The Hundred Cuts here. 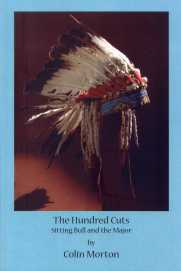 Twice now this morning I am wakened by full-throated geese Veeing over my roof. How is a poet to dream through this?

High in the wind-torn pine a cardinal pipes his claim to all he surveys. From chimney top the crow replies sharply. In cedar branches sparrows watch a blue jay splash in the water.

Fleet light, how do you

taste? How have you left no tracks

in reaching this place?

So begins The Local Cluster (Pecan Grove Press, 2008), a series of meditations on time and place.

The Cabbage of Paradise: The Merzbook and other poems

The Merzbook, a CBC-award winning collection of poetry featuring the life and work of German avant-gardist Kurt Schwitters, returns from out-of-print limbo, now sharing space with Colin Morton’s visual and concrete poetry in a high-spirited romp through some of history’s darker days.

Like Schwitters’s famed assemblages, Morton’s book is a collage – a collage of voices, those of the artists’ friends and rivals, as well as his own. Includes the visual score for the sound poem filmed as Primiti Too Taa. 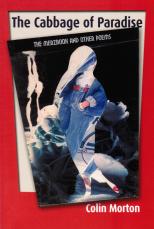 “Dance, Misery (Seraphim Editions) dives into the crowds of history … Colin Morton has the rare ability to think his way through a poem, setting a series of small fires in or brains, the language not only pleasing us with its careful rhythms but igniting our spirits as well.” – Barry Dempster

“Morton’s sixth book, a poem in six parts, coolly and eloquently ruffles our complacency as he examines the burdens of peace, our penchant for self-doubt and self-deception, and our shifting definitions of heroism.” – Sylvia Adams

Coastlines of the Archipelago (BuschekBooks), winner of the Archibald Lampman Award for Poetry in 2001, brings together jazz-inspired lyrics with insightful observations on modern life’s dilemmas.

“There is an enigmatic quality to many of these poems; they become richer with repeated readings. What is perhaps most engaging about [Coastlines of the Archipelago] is that there is a delicate balance between ideas and impressions, precise observations and lyrical reflections, the distant past and the near present, the political and the personal. The voice is suggestive rather than declarative.” – Stephen Brockwell